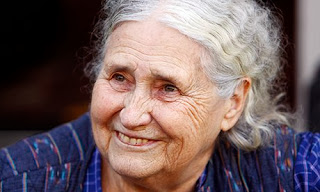 photo from The Guardian

The Captain laid himself down on some boards and went to sleep. When he woke, Michele was surrounded by pots of paint he had used on the outside of the village. Just in front of the Captain was a picture of a black girl. She was young and plump. She wore a patterned dress and her shoulders came soft and bare out of it. On her back was a baby slung in a band of red stuff. Her face was turned towards the Captain and she was smiling.

From The Black Madonna, by Doris Lessing
The Golden Notebook and The Grass is Singing. Have you ever read either of these books? Ever heard of them?
They were written by Doris Lessing who has passed away at the age of 94.
Doris Lessing wrote a stack of books, essays, plays, poetry, short stories, non-fiction, even a comic, in all genres, starting as a teenager. And she did it so well she won a huge big list of awards, including the Nobel Prize. Not bad, considering she left school at the age of 14!
She wrote about Africa, England, the contradictions of being human. As militant leftist and feminist, she wrote about human conditions that go beyond nationalities, race, gender or politics.
People who have lived as long as Doris Lessing have seen a lot of changes in the world. She was born in Iran when it was still Persia, lived in Zimbabue when it was still Rhodesia, and later lived in England.
The next time you are looking for a book to read, try one by Doris Lessing, in English if you can.
VOCABULARIO EN INGLÉS: LAS PALABRAS DE HOY
Words for today:
Resumen en castellano
Fallece una escritora universal
¿Conoces las novelas El cuaderno dorado o Canta la hierba? Las has leído? Son de la escritora Doris Lessing que ha fallecido a la edad de 94 años.
Ella escribió sobre África, Inglaterra, y las contradicciones del ser humano. Como militante de izquierda y feminista, escribió sobre la condición humana, transcendiendo nacionalidades, raza, género o ideología.
Ella nació en Irán, cuando todavía era Peña, vivió en Zimbabue, cuando todavía era Rhodesia, y más tarde vivió en Inglaterra.
La próxima vez que estás buscando un libro para leer, pruebe uno de Doris Lessing, ¡en inglés si puedes!